A lawyer and advocate of political reform and technical innovation, Cheney Culpeper was born in 1601 at Greenway Court, near Hollingbourne, Kent, the elder son of Thomas Culpeper [Colepeper] (1577/8–1662) and Elizabeth Cheney (1582–1638).1 His father, who served as Member of Parliament for Chippenham in Wiltshire (1614) and for Tewksbury in Gloucestershire (1628), was author of the Tract Against the High Rate of Usury (published 1623).

Following graduation on 7 February 1620 from Oxford, where he had matriculated at Hart Hall, Culpeper entered the Middle Temple. He was knighted by Charles I in 1628 and the following year conduced a diplomatic mission to The Hague, delivering to the King’s sister, Elizabeth Stuart, the official letter of condolence following the tragic death in an accident of her eldest son, Frederick Henry. On the occasion of Culpeper’s marriage in 1632 to Elizabeth Stede, his father settled upon him the recently purchased house and estate at Leeds Castle, Kent. The couple went on to have five children together.

In 1641 Culpeper fell ill and, not expecting to survive, he handed back control of the estates to his father. Following a full recovery, however, opposing political differences between father and son reached a point of no-return as the elder Culpeper aligned himself still more strongly with the royalist cause while the younger’s support for Parliament intensified. In consequence, Thomas Culpeper did not re-transfer the Leeds Castle estates to his son. Financial problems ensued. Within the year, Culpeper was asking to delay a payment due to Samuel Hartlib (the two men met, according to Hartlib’s account in his Ephemerides, on 3 April 1641) and was reduced to borrowing; by 1645, he was pawning items to meet his debts.

On 30 April 1646, in an investigation into his royalism, Thomas Culpeper appeared before a Parliamentary Committee for Compounding. In November of the same year Sir Cheney, hounded by both his own as well as his father’s creditors, wrote ‘domestique affaires doe howerly rise into such a storme as (I feare) my anchor, & cable will hardly holde’. In the aftermath of the civil war he was able to mortgage his way out of immediate penury, but eventually he surrendered his claims to Leeds Castle and died intestate, a debtor, in London in 1663.

Metadata for the surviving letters between Cheney Culpeper and Samuel Hartlib conserved in the Hartlib Papers at the University of Sheffield were uploaded initially into EMLO in 2010. Subsequently these records have been refined and augmented by the first Cultures of Knowledge Hartlib Postdoctoral Fellow Dr Leigh Penman, under the supervision of Professor Howard Hotson and Professor Mark Greengrass, and in association with the Humanities Research Institute of the University of Sheffield. The online versions of the letters from the original Hartlib Papers, to which these records in EMLO are linked, were mounted by Michael Pidd and Jamie McLaughlin from HRIDigital at the University of Sheffield. The letters were worked on further by the second Cultures of Knowledge Hartlib Postdoctoral Fellow, Dr Robin Buning, under the supervision of Professor Howard Hotson. In October 2017, the metadata for an additional three letters from Culpeper’s correspondence, which were recorded in the edition edited by M. J. Braddick and M. Greengrass, and published by Cambridge University Press in 1996, were added to the catalogue. 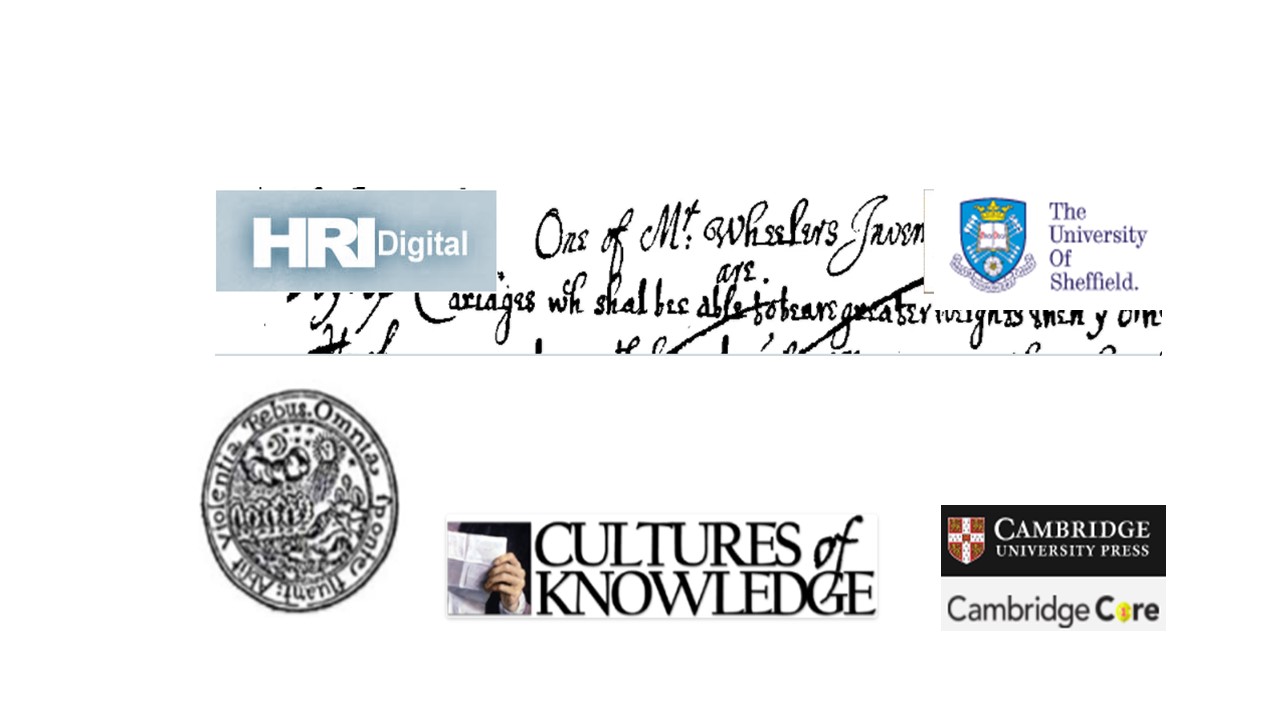 Culpeper’s letters (193 written by him and 16 written to him) are of considerable interest to historians as they ‘illuminate the context and contacts which engaged and informed one “honest radical” in the 1640s and 50s’.2 The letters date between 1641 (the year of his recovery from illness) and 1657, and they chart his engagement with Hartlib’s ambitious plans for a fundamental reform both of the state and of English society.

Culpeper’s surviving letters appear to exist in their entirety within the Hartlib Papers kept in Sheffield University Library. Following Hartlib’s death in March 1662, this archive was purchased (possibly from Hartlib’s son-in-law, Clodius) by William Brereton, a virtuoso who had been in contact with Hartlib since 1653. John Worthington, another member of Hartlib’s circle, found the papers at Brereton’s house in Cheshire in 1667. He sorted through and abstracted a number of the letters before Brereton, who had fallen into financial misfortune, seems to have sold them. From this point the provenance of the archive is unknown until 1933 when they were rediscovered in the office of a London solicitor by George Turnbull, Sheffield’s professor of education, and the archive was removed to Sheffield.

Stephen Clucas, ‘The Correspondence of a seventeenth-century ‘Chymicall Gentleman’: Sir Cheney Culpeper and the chemical interests of the Hartlib circle’, Ambix, 40 (1993), pp. 147–70.

Launch letters to, from, or mentioning Culpeper

Please see our citation guidelines for instructions on how to cite this catalogue.