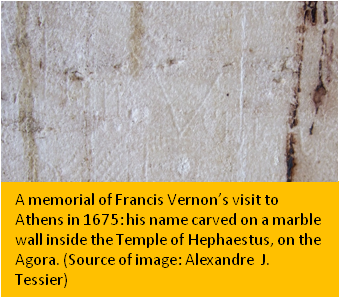 Until recently, Francis Vernon was remembered chiefly as an adventurer and as one of the major correspondents of Henry Oldenburg. He was ‘the invaluable Vernon’ (A. R. Hall and M. B. Hall), the ideal go-between who, whilst staying in Paris as a secretary of the British embassy between 1669 and 1672, transmitted relevant information from the French scientists to the first secretary of the Royal Society. By contrast, however, the rest of Vernon’s correspondence has remained somewhat neglected, as have the events of his brief and tragic life.

The scion of a secondary branch of a noble lineage from Norman origin, Vernon was born in London, in 1637, into a wealthy family. A promising boy, he received an excellent education at Westminster School and then at Christ Church, Oxford, where he developed a deep interest in what was regarded then as the ‘new science’: later he would remember with a great sense of gratitude one of his masters, the astronomer Seth Ward, one of the propagators of heliocentrism in Britain, ‘in Mathematicis mihi Praeceptor plurimum colendus’. But very early in his life, Vernon became addicted to travel and his curiosity about the terrestrial world was such that it could not be appeased with the usual grand tour and the traditional peregrinatio academica to a few selected foreign universities. As observed by one of his contemporaries in Oxford, Vernon was ‘possess’d with an insatiable desire of seeing’ (Anthony Wood). At present, the chronology of his early trips remains obscure, but a variety of tenuous evidence suggests that, at the very least, he visited Germany, Poland, Holland, France, Italy, and Spain. Unfortunately, around the middle of the 1660s, one of his Mediterranean expeditions met with disaster: he was captured by Barbary pirates and remained some time in captivity. We know that by the beginning of 1667 he had been released, as in March of this year he wrote a long letter to his mother from Rome with a description of the eternal city.

From this point onwards, the trajectory of his life becomes significantly more clear. When in March 1669 a school friend of his, Ralph Montagu (subsequently the first Duke of Montagu), was appointed as ambassador to Louis XIV, Vernon followed him to Paris and shortly afterwards, thanks to his linguistic skills and his Oxonian supports, succeeded in securing a position as secretary at the embassy. As an accomplished scholar, he quickly developed many links with the most prominent savants in the French capital – especially with Christiaan Huygens, who became his intimate friend, but also with Abbot Jean Picard, the astronomer Giovanni Domenico Cassini, Henri Justel, and the Maurists of Saint-Germain-des-Prés, notably the famous Dom Jean Mabillon and Dom Luc d’Achery, to name but a few figures. There is no doubt that these learned acquaintances helped him fuel his correspondence with Oldenburg, which was fairly celebrated by the Halls. But in parallel, as expected from a diplomatic agent, Vernon also maintained regular relations with the office of the Secretary of State, namely with Sir Joseph Williamson, who was at that point in charge of all ordinary diplomatic reports and intelligence in Southern Europe. This administrative correspondence, much undervalued until now, forms the collection that is calendared at present in EMLO.

In early 1672, at the end of Ralph Montagu’s embassy, probably disgusted by the prospect of a new war against Holland, Vernon decided to call a halt to his diplomatic career and to return to what he himself called his ‘old inclination’ and ‘most genuine delight’, namely science. He remained some time in England, where he had been elected a member of the newly formed Royal Society, and took an active share in its works, as may be observed from entries in Robert Hooke’s diary. But the travel demon did not leave him in peace and induced him to undertake a new great adventure, this time in the Levant. At the end of 1674, he left England for Venice, where he embarked in a galley bound for Greece. There he made a very interesting tour, visiting Delphi, Mystras, Athens, and Corinth, among other places. This expedition is still of great value for archaeologists, because whilst on the road Vernon collected epigraphic notes, and thanks to his astronomic skills he was able to establish the first geographic coordinates of several ancient sites. He also visited the Acropolis in detail, just a decade before the famous explosion which ruined the buildings. We know that he planned to write a complete account of his experiences — exactly as two of his contemporary travellers did with much success: Jacob Spon and George Wheeler, both of whom he had accompanied briefly on his way from Venice to Zakynthos. Unfortunately, however, the rest of his trip turned out to be catastrophic.

First, he lost the only fellow traveller to have remained with him, one Sir Giles Estcourt, who died suddenly near Delphi. Then, as if in warning, while crossing the Aegean Sea he had to face another pirate attack and was held to ransom. But he decided nevertheless to proceed onwards to the East. Finally, after stops in Smyrna and Constantinople, and a long road journey which led him to Persia via Armenia, he was killed in a petty dispute, reportedly about a knife that had been stolen from him. This sad end took place around the beginning of 1677, near Isfahan. The news of his death became known in England only in June 1677. Jacob Spon, the French archaeologist, paid tribute in his book to the memory of his late fellow traveller: Vernon was ‘an astronomer and a good mathematician […], a very learned person, who spoke seven or eight languages; but he was born under a bad star’.

Eventually, the remnants of Vernon’s journals and notes made during his trip in Greece found their way back to Britain, where they are preserved today in the Royal Society archive. These provide valuable hints of what he would have been able to achieve besides the collection of his surviving letters to Oldenburg and other men of letters.

The metadata for the calendar of correspondence between Vernon and Williamson was collated by Dr Alexandre J. Tessier, of Évry-Val d’Essonne University/IDHES-Évry (France), primarily in the course of his research on Sir Joseph Williamson and his correspondents. It was checked and completed thanks to a doctoral fellow grant from the Cultures of Knowledge project. This calendar is intended to serve as the basis for preparing the first general edition of the correspondence of Francis Vernon.

At present the corpus compiled by Alexandre J. Tessier consists of metadata for 275 letters, ranging from 27 March 1669 to 18 May 1672, written by Francis Vernon, based in Paris, to Sir Joseph Williamson, who was located at the English court. The unusual amount of dispatches for one correspondent and for a span of just four years — the average number of letters amounts to almost seventy items per year — may be explained easily by the fact that this correspondence is one of routine administration. Vernon used to write for every ordinary mail service between Paris and London, namely every Wednesday and every Saturday. He always wrote his letters to Williamson in English, except on the odd occasion when compiling French news.

The collection of letters exchanged between Vernon and Williamson offers three major points of interests. First, it is the natural complement of the scholarly correspondence exchanged with Oldenburg (which may be consulted in the Halls’ Oldenburg edition); in many instances it conveys frequent echoes of the intellectual life in Paris, for Williamson himself was particularly curious about these matters. Secondly, as expected Vernon had to transmit to Whitehall all the general political news, which could be a trifle tedious. But in many cases he felt free to adopt a personal, and sometimes critical, point-of-view: this is unusual, for in general secondary diplomatic agents remained discreet with regard to their own opinions. Vernon was a daring individual. Last, but by no means least, Vernon appeared keen to provide special reports of certain ceremonies and social events that took place at the court of the Sun King, who was at this point moving towards the climax of his reign. As a result, Vernon left a number of vivid descriptions and narratives, just as if he were travelling in an exotic country, often interlaced with a slight touch of irony that is deserving of attention.

The letters calendared for the correspondence between Vernon and Williamson come, at present, from the British National Archives, where they are preserved in the State Papers, Foreign Series, France, in the volumes SP 78/126–135. Since their arrival in England, they have not left the public records, for their recipient, Sir Joseph Williamson, among his many responsibilities, happened to be the Keeper of the State Papers from 1661 until his death in 1701, and duly he used to stock this repository that he directly controlled with the correspondences he received as a diplomat and a statesman.

Francis Vernon, ‘Mr Francis Vernon’s Letter, Written to the Publisher [i.e. Henry Oldenburg] January 10th 1675/1676, Giving a Short Account of His Observations in His Travels From Venice Though Istria, Dalmatia, Greece, and the Archipelago, to Smyrna, Where This Letter Was Written’, Philosophical Transactions of the Royal Society, no. 124 (24 April 1676), pp. 577–80.

Letters in all EMLO catalogues from, to, and mentioning Vernon