Margaret Clifford (née Russell), Countess of Cumberland, was born in 1560, the youngest child of Francis Russell, second earl of Bedford, and his wife Margaret (d.1562), who was the daughter of Sir John St John of Bletsoe. Her childhood was spent in Northamptonshire with her aunt, Mrs Elmes, and then in Bedfordshire at Woburn, during which time she received a wide-ranging education and developed lifelong scholarly interests. She was an extremely pious literary patron who received many dedications and was also deeply interested in alchemy and medicinal experiments.

In 1577 she married her father’s ward, George Clifford, third earl of Cumberland (1558–1605). They had three children, only one of whom survived to adulthood, Lady Anne Clifford (1590–1676). Margaret’s relationship with her husband, a profligate womanizer, was difficult, and the pair separated in 1600. On his death, the earl of Cumberland excluded his daughter from his inheritance, but Margaret was active in defending Anne’s claim through litigation, overseeing the assemblage of documentary evidence that later formed the basis of three great record books of the Clifford family.

Margaret Clifford’s letters highlight her involvement in various patronage activities, as well as her role in acting as an intermediary and petitioner on behalf of her daughter, Anne, during the latter’s disputed inheritance, which necessitated writing to various privy councillors and to the monarch. The voluminous correspondence with her husband documents the ups and downs of a sixteenth-century marriage, while her letters to her daughter reveal a close mother-daughter bond. Margaret Clifford died on 24 May 1616, at which point her papers passed to Anne, who had them preserved and arranged for a letter-book to be drawn up containing certain items from her mother’s correspondence.

The WEMLO project is led by co-directors Professor James Daybell (Plymouth University) and Dr Kim McLean-Fiander (University of Victoria). When WEMLO began, much of the metadata for a number of individual women’s correspondence catalogues had been collated independently by James Daybell after years of research in archives around the world. Subsequently, Kim McLean-Fiander oversaw the curation of this metadata.

The WEMLO project has benefitted from the research and editorial expertise of Dr Ian Cooper and Dr Bruna Gushurst-Moore and the design expertise of Dr J. Matthew Huculak. All WEMLO-related catalogues have relied upon the skill and expertise of EMLO Digital Editor, Miranda Lewis. WEMLO would like to thank the entire team at Cultures of Knowledge and EMLO for their assistance and ongoing support. 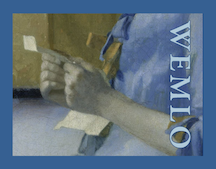 The catalogue contains metadata of 131 English letters written between 1580 and 1616. Of these, 110 are from Margaret Clifford, countess of Cumberland, to her family, including her husband George Clifford, her daughter Anne Clifford, and her sister Anne, Countess of Warwick, as well as to various government and court figures such as King James VI and I, Anne of Denmark, Sir Julius Caesar, and Robert Cecil, earl of Salisbury. Among her correspondence is a fascinating autobiographical letter addressed to Dr Leyfield. The remaining letters are addressed to her, and include a series of letters from her husband, her daughter, and her sister, as well as a letter from the poet Samuel Daniel, who tutored Anne Clifford. Many of the letters survive as originals in Margaret’s own hand; others are contained in a letter-book which was produced at the behest of Lady Anne Clifford (Longleat House, Wiltshire, Portland MS 23).