The SPG as an Incorporated Company

The SPG as an Incorporated Company

The Society for the Propagation of the Gospel (SPG) was founded in 1701 as an incorporated company. William III granted this status to the company by royal charter and it was central to SPG’s activity as an extra-territorial agency engaged in mission, commerce and politics beyond the boundaries of England as an emergent nation-state. The incorporated company was a flexible structure used by monarchs, projectors, and adventurists to found overseas plantations, establish trade networks, and generate wealth; it allowed the fusion of commerce with charitable impulses, and the two were often inextricably and complexly entangled. The Society’s founding members were largely drawn from London’s political, clerical, and merchant elites, and this tight network of overlapping and powerful interests meant that SPG exercised significant power and patronage, both throughout the British Isles and beyond as the Society sought to fulfil its mission to propagate the gospel to the indigenous peoples of the Americas, enslaved Africans, and expatriate Britons of varying degrees of religiosity whether conformist or dissenters in continental Europe, the Caribbean, and North America.

A plaque which appears on the building of the former SPG headquarters, in Tufton Street, Westminster. 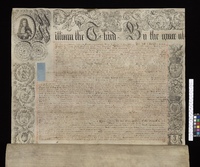 The original Royal Charter of Incorporation (1701), along with the royal seal.

A printed copy of the SPG's charter or incorporation.

The SPG seal appears in the frontispieces of many early SPG publications.

Discussion of the Design of the SPG seal 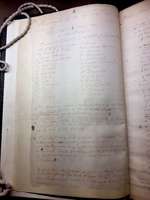 In this July 1701 journal entry from the Journal of the Society for the Propagation of the Gospel in Foreign Parts (Vol. 1, 1701-1710), the committee discusses the design and commissioning of the SPG seal.

The first minutes of the SPG committee meetings. The Bishop of London is asked to recommend a missionary for Narragansett. The Governor designate of New Jersey is asked to divide colony into parishes. George Keith is granted £200 per annum travelling… 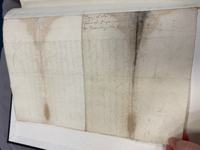 Proposals for Propagating the Gospel in all Pagan Countries 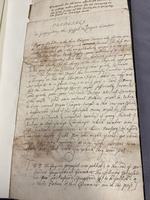 'Proposals for propagating the Gospel in all Pagan countries.' The first proposal, published in Gordon's Geographical Grammar, is for raising a fund to train clergy in pagan languages and send them out as missionaries. Supplementary proposals,…

Order of Council in Favour of Chaplain that go to Sea

Duplicate of Order in Council, 25 Apr. 1679, permitting clergy serving as chaplains at sea or in the plantations to retain benefices in England.

Instructions for the Clergy Employed by the Society 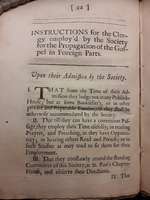 Instructions for the Clergy Employed by the Society (1701/2). This printed pamphlet provides instructions to new SPG missionaries, advising them on their responsibilities and appropriate conduct during their journey to the colonies, and upon arriving…
View all 12 items